Do You have Carpal Tunnel Syndrome..Lets Find Out - Diagnose at Your Home

Carpal tunnel syndrome surgery is the most common peripheral nerve surgery done in the United states. Annually about 3,50,000 carpal tunnel release performed here. Females are slightly more affected than the males and people more than 55-60 years are the most common group.

What is Carpal tunnel syndrome? 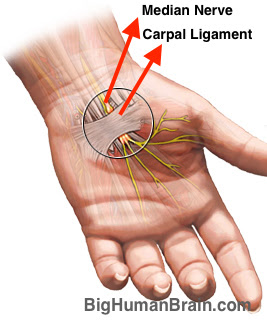 As the name suggest there is a small tunnel under the carpal ligament in our wrist joint. About 10 structures pass through this small canal including eight tendons, one muscle and one nerve that is median nerve. Whenever the size of this Cana gets compromised either with ligamental hypertrophy, tumour, bone growth etc. the median nerve gets compressed and patient develops pain. This is the mechanism how CTS develops in simple words.

Let us check out the symptoms of carpal tunnel syndrome

The most common symptoms are pain and numbness in the hand. Pain is more in the thumb index and middle finger. This is due to the typical distribution of median nerve supplying the lateral three and a half fingers and thenar aspect of the hand. Carpal tunnel patients have typical increase in pain during night. This increase in pain is due to the venous stasis which happens during the sleep. When you get up a night with severe pain some sort of a relaxing exercise can be done like repeated slow flexion- extension movements of wrist and fingers. This activity increases blood flow and helps in soothing the pain.

In severe carpal tunnel syndrome patients also can have weakness of the hand muscles which is not evident in mild cases. As you develop motor weakness of the hand it is the time to undergo surgical intervention. How to find out whether you have developed motor weakness due to CTS? You will have difficulty in flexing the proximal interphalangeal joint of the index and middle finger. Also you have abduction difficulty of the thumb.

How to diagnose carpal tunnel syndrome by yourself?

There are few tests which can be done at home to get an idea whether you having CTS or not. 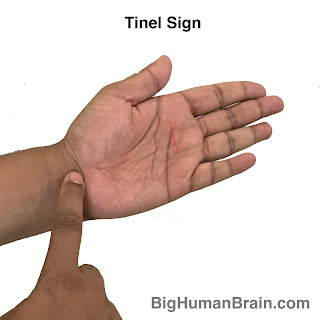 You just stop at the centre of the wrist joint at the lower end of the palm multiple times and see whether you are getting a shop like sensation spreading through the palm to the thumb, index and middle finger. 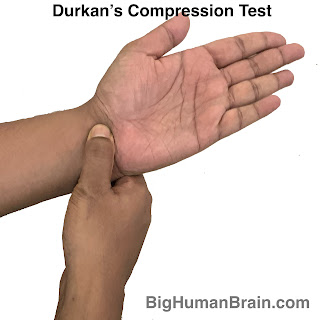 In this test you just press the same region for about 30 seconds and see whether you are experiencing the similar symptoms or any worsening of the pain. In such case it is high you might be having CTS. 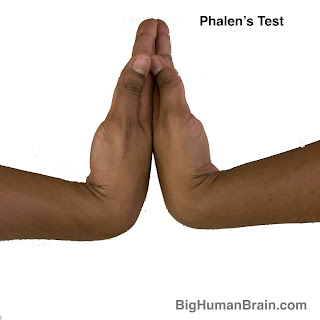 This is the third test to diagnose CTS. This test you have to flex your wrist as much as possible for about 60 seconds and see for any symptoms.

The first test your physician would be doing is a nerve conduction study. In the early stages it will show a delay in the sensory conduction. In severe cases motor conduction will also be affected.

Ultrasound imaging is done to find out any nerve thickening or inflammation. It will be useful in cases where nerve conduction study result is inconclusive.

In conditions where any abnormal bone growth is noted and x-ray or a CT scan may be needed. In case of any nerve tumours or other joint pathologies MRI scan also might be considered.

What are the treatment options for carpal tunnel syndrome

In early cases non-surgical treatment options can be tried. these include 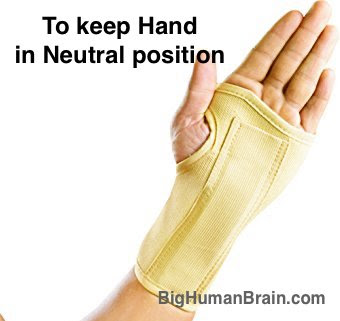 Wrist splints are effective particularly in early stages of CTS. Many people asks the duration of wearing wrist splints. Studies have shown that when it is worn full time it is the best. But people notice it uncomfortable during routine jobs. In such cases brace can be worn during sleep. These splints help in keeping the wrist in neutral position and this will avoid any compressive stress to the nerve.
Locally injected steroids produces significant pain relief but it is often temporary. So in severe cases steroid injection followed by wrist splints can be an option. NSAIDs are anti-inflammatory medications which reduces the pain temporarily.
Ultrasound and laser therapy shows variable results. But there is no harm in trying as there are almost no side effects.
Exercise doesn't have much effect in reducing the symptoms of CTS

Surgery is considered  in the following conditions


There are two types of surgeries.
1.     Open Surgey
2.     Endoscopic Surgery
Both open and endoscopic surgery have equal efficacy in alleviating the symptoms of carpal tunnel syndrome. It is the surgeon’s familiarity and patient’s choice that decides the best approach in each patient.
at June 07, 2020

Breath: The New Science of a Lost Art -Book Review

There is nothing more essential to our health and wellbeing than breathing: take air in, let it out, repeat 25,000 times a day. Yet, as a sp...

The information provided in or through this Website is for educational and informational purposes only and solely as a self-help tool for your own use. We have tried our best to avoid errors. Still it is not a substitute for professional medical advice, diagnosis or treatment. Never ignore professional medical advice in seeking treatment because of something you have read on this website.